Here you can find an overview of the research lines I have been developing during my career.

Since I joined the aQa group at Leiden University in November 2020 this has been my main focus.

There is a major worldwide effort and a fierce competition among companies such as Google, IBM or Microsoft to build a scalable quantum computer. Existing quantum computers are noisy, limited in their number of qubits and can run quantum algorithms for a very short time before decoherence from the environment kicks in and renders all computation essentially lost. However, these devices have already demonstrated capabilities well beyond classical supercomputers, albeit for some problems not yet of practical use.

When I joined the Theory Division of the Max Planck Institute of Quantum Optics we developed a quantum algorithm for ground-state preparation and high-precision ground energy estimation with an improved number of qubits.1 In the context of noisy, intermediate-scale, quantum devices, a major bottleneck is the unbearable number of prepare & measure repetitions required for these algorithms to be practical. To circumvent this, we combined the principles of adiabatic spectroscopy (few repetitions) and variational quantum algorithms (few parameters) for ground state preparation.2 We are currently investigating the applicability of these principles with Rydberg atom quantum simulators for classical optimization tasks. We have also investigated algorithmic cooling principles for ground-state approximation.3

I started working on this project when I joined the Theory Division of the Max Planck Institute of Quantum Optics. There is a major worldwide effort and a fierce competition among companies such as IBM, Google, Microsoft or Nokia Bell Labs to build a scalable quantum computer: Larger and larger computers are even placed online. Although the First Generation of Quantum Computers may look like stone-age quantum computers compared to universal, fault-tolerant ones (i.e., they will not be able to implement quantum error correction just yet), it is still open whether they can already outperform classical computers for specific problems. 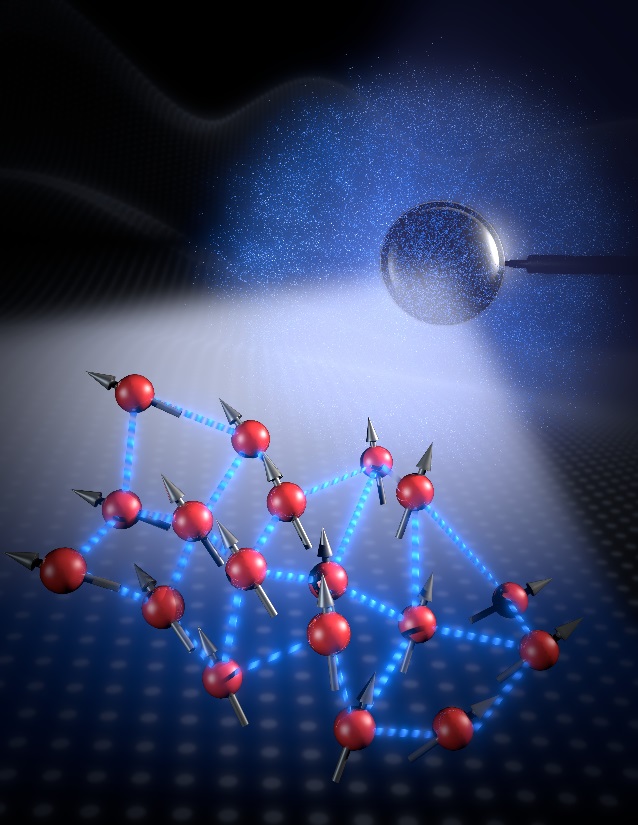 I started to work in this field in 2013 during my Ph.D. studies at ICFO - The Institute of Photonic Sciences. This was the central topic of my Ph.D. thesis. Bell correlations are those that do not admit a local hidden variable model (LHVM) and constitute a resource for device-independent quantum information processing. Such correlations are strictly stronger than entanglement.

We started by developing multipartite Bell inequalities built from few-body correlators, typically one- and two-body. We focused on Translationally Invariant4 (TI) and Permutationally Invariant5 (PI) Bell inequalities. In 2014 we proposed an experimentally-friendly method to detect the existence of Bell correlations in many-body systems requiring onyl access to total-spin components.6 This enabled the first experimental detection of Bell correlations in a Bose-Einstein condensate of 480 87Rb atoms in 20167 and in a thermal ensemble of 5·105 atoms in 2017.8

In 2015, during my research stay at the Theory Division of the Max Planck Institute of Quantum Optics we showed that Bell correlations could be revealed in many-body systems simply by measuring their energy.9 This method is specially tailored to spin systems in one spatial dimension, where the limit within LHVM theories can be efficiently computed via dynamic programming. In some special cases, the Hamiltonian can even be exactly diagonalized by mapping it to a free fermion system via the Jordan-Wigner transformation, thus even yielding analytically closed formulas.

In 2017, we proposed a way of efficiently approximating the set of correlations of a many-body system admitting an LHVM from the outside.10 This consists on a hierarchy of Semidefinite Programming (SdP) tests that approximate convex hulls of semialgebraic sets,11 based on Lasserre's method of moments.12 This enables one to check e.g. experimental data against all PI few-body Bell inequalities with a simple test.

Currently, we are working on several research directions. First, to understand the structure behind operator-sums-of-squares for PI Bell inequalities that one obtains with the NPA (Navascués-Pironio-Acín) hierarchy. Second, to quantify how much entanglement and nonlocality depth can be certified by measuring such inequalities. Third, to understand the role of temperature as a detector of nonlocality and the connection between the Bell operator and the quantum harmonic oscillator via the Holstein-Primakoff approximate transformation. Fourth, we are exploring the role of energy as a detector of nonlocality in 2D systems, building upon chordal extensions of graphs.

I started this project at at the Theory Division of the Max Planck Institute of Quantum Optics in 2017. 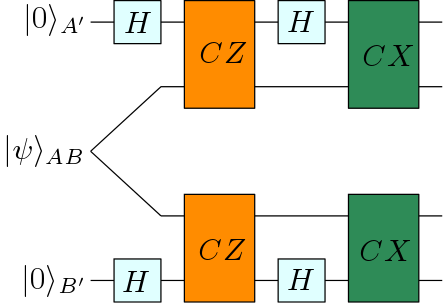 With the advent of the Device-Independent (DI) paradigm to quantum information processing, Bell inequalities have gained an important role as certificates of a series quantum properties. I started working in that direction in 2013, during my Ph.D. studies, in the context of elemental monogamies of correlations, applied to DI Randomness Amplification.13

In 2015 I started working on DI Self-Testing for Maximally Entangled (MaxEnt) states. We proposed the SATWAP (Salavrakos-Augusiak-Tura-Wittek-Acín-Pironio) Bell inequality, which has the property that is maximally violated by MaxEnt states.14 In 2017 we started an experimental collaboration with the University of Bristol. We probed the SATWAP inequality on a Large-scale Integrated Optics platform embedding more than 550 optical elements, where programmable bipartite quantum states up to local dimension 15 can be prepared.15 In 2019, we extended this characterization to GHZ quantum states of arbitrary dimension,16 we studied the self-testing of maximally entangled states from the mutually-unbiased bases perspective17 and in the context of graph states.18

Self-testing results typically require the maximal violation of a Bell inequality, which is hard to guarantee in an experiment. During my time at the Max Planck Institute of Quantum Optics we proposed a framework to robustly self-test steerable quantum assemblages 19

Bound entanglement in the symmetric states

I started working on this project in 2010 during my summer internship at ICFO - The Institute of Photonic Sciences, finding a numerical example proving the existence of PPT (positivity under partial transposition) symmetric entangled states of four qubits,20 hence solving a long-standing open problem. Symmetric quantum states share a deep connection with mixtures of Dicke states. As a warm-up project in my Ph.D. studies, we delved further into the study of entanglement in PPT symmetric states of several qubits.21

In 2016, I have revisited this problem on various occasions: First, with my former B.Sc. student, in the context of Device-Independent Tsirelson's bounds for PPT states. Second, with my current co-supervised Ph.D. student, in the context Diagonal-Symmetric (DS) PPT states, where we have unveiled a connection with the field of Quadratic Conic Optimization, which enables one to show, in a natural way, that deciding membership in the set of DS separable states is, even in this very simplified case, NP-hard.22

In 2021, we showed a correspondence between exceptional copositive matrices and non-decomposable entanglement witnesses for DS bipartite quantum states.23 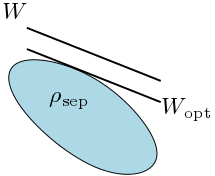 I started working on this project in 2010, also during my summer internship at ICFO - The Institute of Photonic Sciences, which resulted in my first publication.24 There, we investigate the connection between (decomposable) Entanglement Witnesses (EWs) and their optimality properties in terms of their action on Completely Entangled Subspaces (subspaces orthogonal to Unextendible Product Basis).

Also, during my Ph.D. studies we rediscovered a method to check for optimality of EWs,25 which found application in the study of the now disproven Structural Physical Approximations conjecture.

During my PhD studies I also had the opportunity to apply some of the knowledge I gained from convex geometry and polytopes in the context of the study of Passive States.26

During my last year at ICFO, I had the privilege of being part of the team that organized The BIG Bell Test. This consisted in an online experiment, where we recruited more than 100.000 participants through a videogame, that not only helped test the Freedom of choice loophole in a Bell experiment,27 but it also brought science closer to thousands of people all over the world.

Site built using amCharts, Boostrap, Font-Awesome, Piwik, d3 and Wordle.
Parts of this website have been developed in the context of the European Union’s Horizon 2020 research and innovation programme under the Marie Skłodowska-Curie grant agreement No 748549